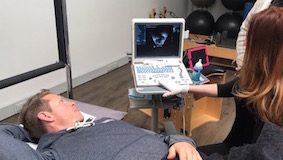 As I lay on the physio bed with no pants on and just a towel covering me up, while a physio has her ultrasound probe up my undies and placed on my perineum with four other female physios standing around watching I think to myself, that’s slimy and cold, and how did I get to this point in my life… But who cares because my pelvic floor strength will be 5 out 5 for sure! I’ll show them! Little did I know…

Working with women, particularly pregnant and postnatal women, the phrase ‘pelvic floor’ is mentioned every day. It’s an important topic to discuss of course because it’s entirely relevant, and for me being a personal trainer who works mostly with this population group, it’s important that I have a firm understanding on how the pelvic floor functions so I know when to refer out to a Women’s Health Physio. But my reason for writing this article is to give you a better understanding by sharing my knowledge and experience.

Now where was I, how did I get to that physio bed in the first place!

I was asked by Annette, the owner of Sans Souci Physio, as a small favour to be a male subject for an inservice at her clinic. The inservice was education on pelvic floor function in men obviously. And incase you didn’t know this already, there’s not a huge difference in the pelvic floor of a guy or a gal. I’m pretty sure some female clients I’ve had didn’t even know that men have a pelvic floor! So for the ladies out there who are in that boat, yes men have a pelvic floor just like you do, we just never have to push a baby through it.

Moving on, I found out something really valuable about my own pelvic floor function. Something of which no matter if you’re a woman or a man you should really be aware of, something which actually may be happening with you too! This something is becoming quite a topic in the physiotherapy world, and can lead to some life changing and really devastating consequences if not picked up and left for a long period of time, particularly if you’re a Mum or soon to be Mum.

Now at this stage it hadn’t been going on for that long, my poorly learned pelvic floor contraction that is, maybe a year or so. So the good news is that I’m aware of this now, and I can go about rectifying the situation :-), haha. I have been given some advice on how to down train this particular muscle and up train the muscles which haven’t had the chance to be contracted as much, so I can develop a better functioning pelvic floor in general.

A key takeaway point here for anyone, but in my case specifically, is that if I hadn’t had this checked out by a professional who specialises in pelvic health I most probably would have developed issues as time passed. Some serious issues 10 years on may potentially be bowel cancer for example. Not having the ability to clear my bowel properly, over time and untreated you can imagine what would happen here right? My Mother has had bowel cancer, bowel cancer is one of the big four cancers. Healthy bowel motions are integral for good health.

For men and women, an over active pelvic floor can develop from a UTI or a traumatic labour or a common one I see is people, particularly women, who suffer from low back pain, maybe because they have some hypermobility around the hips, or in my case something simple like always doing the wrong type of pelvic floor contractions in the gym.

For the ladies specifically, as I always say to you, please visit your local Women’s Health Physio for a Women’s Health Assessment. If you’re pregnant it’s a good idea to have a check up, especially if you’re planning to avoid having surgery, you do not want an overly tightened pelvic floor come delivery day. If you’ve just been pregnant, even if you had a C-Section it’s a good idea to have a check up as well. I know your GP or Obstetrician may do a quick run through with you at your 6 week check up, but the large majority of these professionals do not look for muscular abnormalities which may pose potential risks later on in life unfortunately.

In saying all this, one persons experience is never the same as anothers, so don’t start worrying about if you have an over activity of your pelvic floor. But if you’re a due soon or you’re postnatal, then I do think it would be a valuable use of your time to have an expert check you, and if everything’s going great then that’s one less thing you need to think about.

I hope this info has enlightened you a little and if you’re a Mum living in Sydney who wants to start exercising again, be sure to check out the ‘Movement For Mummas’ classes I run in Dolls Point and North Sydney. Or ask about my affiliated Mum focused businesses in Auckland, Perth, Hobart and all around Sydney. We all provide onsite nannies and we all collaborate and work closely with Women’s Health Physios to ensure you’re properly taken care of and you end up with a healthy pelvic floor.

My mission is to Create Stronger Mums, physically & mentally and The Worlds Best Role Models!